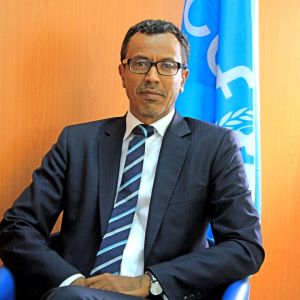 Mr. Abdullah A. Fadil was appointed UNICEF Representative in Sudan in June 2016. Mr. Fadil has over twenty years of experience in strategic management, peace-making and peace-building, international humanitarian relief and development work, public administration, political analysis, advocacy and project management in Africa, Europe, and the Middle East. Prior to this role, Mr. Fadil served as the Director of the UN Humanitarian Monitoring Mechanism for Syria (2014-2016), working on the delivery of humanitarian assistance to Syrians from Jordan, Turkey and Iraq. He was also the Deputy Head of Mission and Chief of Staff for the Organisation for the Prohibition of Chemical Weapons (OPCW)-UN Joint Mission in Syria (2013-2014), entrusted to oversee the Elimination of Chemical Weapons Programme in Syria. From 2010 to 2013 he was the Chief of Mission Support for the United Nations Truce Supervision Organization (UNTSO), based in Jerusalem, and oversaw operational support to military observers in Lebanon, Syria, the Golan Heights and Egypt. Mr. Fadil has significant work experience in Sudan. He served as the Chief Human Resources for the United Nations Mission in Sudan (UNMIS), based in Khartoum, from 2004 to 2006, and as the Head of Office in South Darfur from 2006 to 2008. After serving as Acting Chief Field Operations with the International Civil Aviation Organization (ICAO) from 2008 to 2009, he returned to Sudan as the Head of Office in West Darfur for the United Nations African Union Mission in Darfur (UNAMID) from 2009 to 2010. Mr. Fadil has a strong management background with significant financial, human resources, and operational responsibilities. He served as Chief Human Resource Planning with the Department of Peacekeeping Operations in New York (2003-2004), and from 1994 to 2003 in several positions with the United Nations Interim Administration Mission in Kosovo, the Organization for Security and Cooperation in Europe (OSCE), and the McGill University. Mr. Fadil holds two Master of Science degrees: one in Public Policy and Management from the School of Oriental and African Studies (SOAS), and one in Industrial Relations and Personnel Management from the London School of Economics (LSE). He is married with four children.

Graduated with a Bachelor of Science in Civil Engineering 1986 from University of Bahrain, and obtained his…