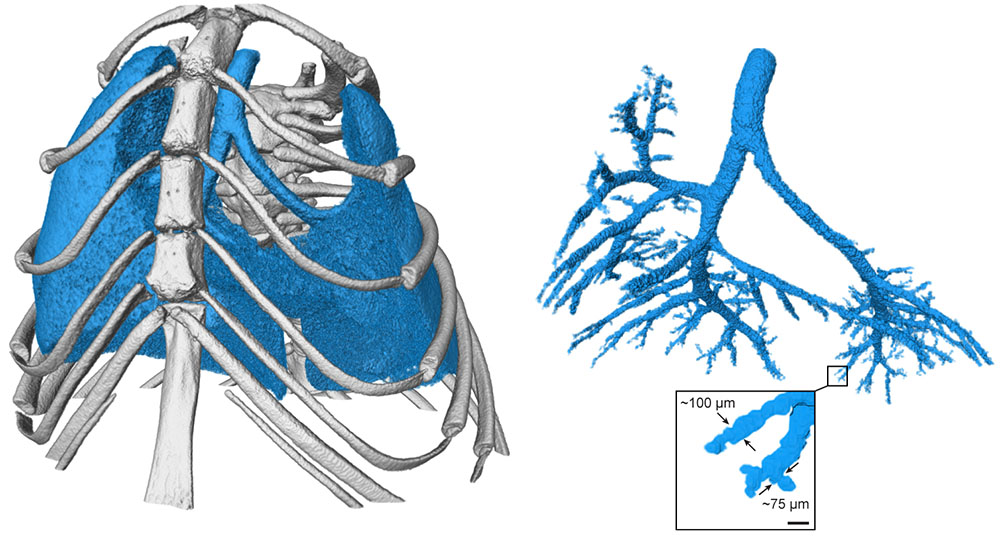 In a first for X-ray imaging, researchers in Sweden generated high resolution, three-dimensional images of the lungs of free-breathing mice, without using mechanical ventilation. The technique developed at KTH Royal Institute of Technology could enable research on lung disease to be performed without risking injury to mice through artificial respiration.

Reporting in Communications Physics, the researchers showed that propagation-based phase-contrast X-ray tomography can be used to study the tracheobronchial tree down to the terminal bronchioles – which are as thin as strands of human hair – in free-breathing mice. What’s more, they were able to do it with low radiation doses, which allows for repeated imaging without harm to the animals.

Mice are typically used in lung disease research due to the similarity of their respiratory system to that of humans. However, the animals need to be placed on ventilators that control their breathing, in order to avoid blurry images.

“Our work shows that it is possible to completely avoid using ventilators, to let the animals breathe themselves, and still get very sharp X-ray images in both 2D and 3D,” says KTH researcher Kian Shaker, from the Department of Applied Physics.

Non-invasive imaging of lung diseases in animals will enable a greater understanding of similar conditions in humans, Shaker says. The images are relevant because they visualize even the thinnest bronchial branches, measuring less than 0.1 mm in diameter in mice and which end in clusters of alveoli, he says.

The footprint for the imaging set up is also smaller than what is required for synchrotron facilities where high-resolution respiratory imaging of animals is typically performed.

In the future, these images indicate what Shaker and his colleagues hope will be possible also for imaging human lungs, where the smallest airways have diameters below 2 mm and are invisible with the technology used in hospitals today.

The research was funded by the Knut and Alice Wallenberg Foundation.