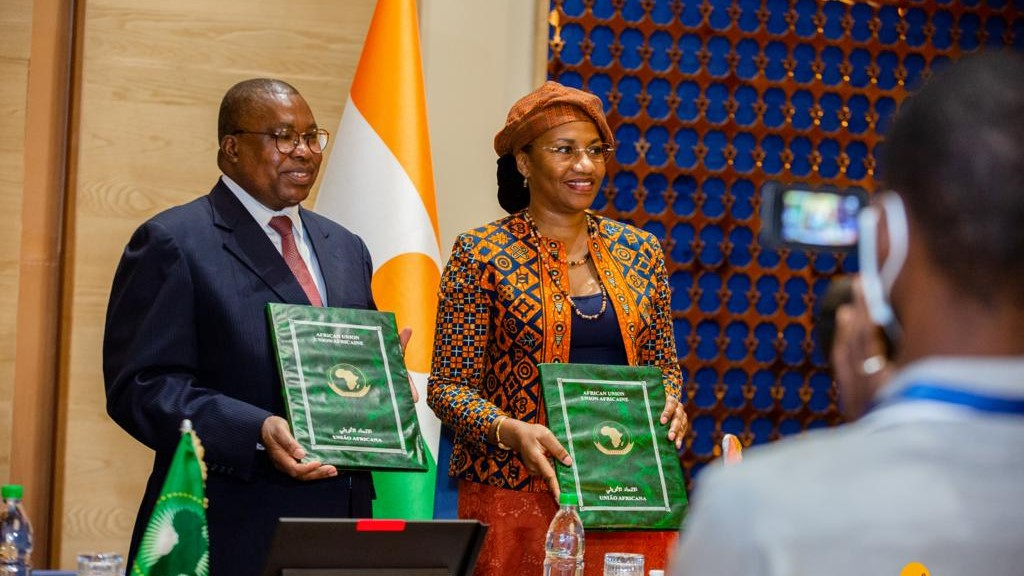 NIAMEY, 2 April 2022 – Preparations for the African Union Summit on
Industrialization and Economic Diversification
got a boost with the signing of an agreement between the African
Union and the host country Niger.
The kick-off meeting took place following the 35th Session of the Assembly
of Heads of State and Government,
which decided that the Summit on Africa’s Industrialization and Economic
Diversification be held from 20 to 25 November 2022 in Niamey, Niger.
It was requested that the African Union Commission (AUC) in collaboration
with the United Nations Industrial Development Organization (UNIDO),
the United Nations Economic Commission for Africa (UNECA),
and the AfroChampions Initiative organize the Summit during the Africa
Industrialization Week (Assembly/AU/Dec. 827(XXXV) Page 1).
Speaking at the signing ceremony, Albert Muenda Muchanga, African Union’s Commissioner
for Economic Development, Trade, Tourism,
Industry and Minerals, said that it was only through industrialization and economic
diversification that Africa would be competitive in the global marketplace:
“We shall work on an action-oriented outcome document that opens new possibilities
for the accelerated industrialization and economic diversification of Africa,” he added.
The key issues for the Summit include bringing skills training into step with the actual
needs of the labour market; mobilizing financing for Africa’s structural
transformation; building infrastructure,
especially energy, for Africa’s economic transformation; promoting commodity-based
industrialization; deepening continental economic integration;
harnessing the opportunities of the Fourth Industrial
Revolution; and building internal R&D capabilities.
“The Summit will put a spotlight on the need and process of Africa’s Industrialization,”
Mr. Muchanga said. Recognizing the crucial importance of Africa’s industrial development,
the United Nations General Assembly passed a resolution in 2016 declaring
the period 2016-2025 as the Third Industrial Development Decade for Africa (IDDA III),
and tasked UNIDO with leading the initiative with a range of partners.
The host agreement was signed by Commissioner Muchanga and Niger’s Minister
for Industry and Youth, Gourouza Magagi Salamatou.
“Last year’s summit could not take place owing to the Covid-19 pandemic.
But I am confident that we shall have a physical summit,” Mr. Muchanga said.
He thanked Niger for being willing to host the Summit and the strategic
partners who were involved in the preparations for it.