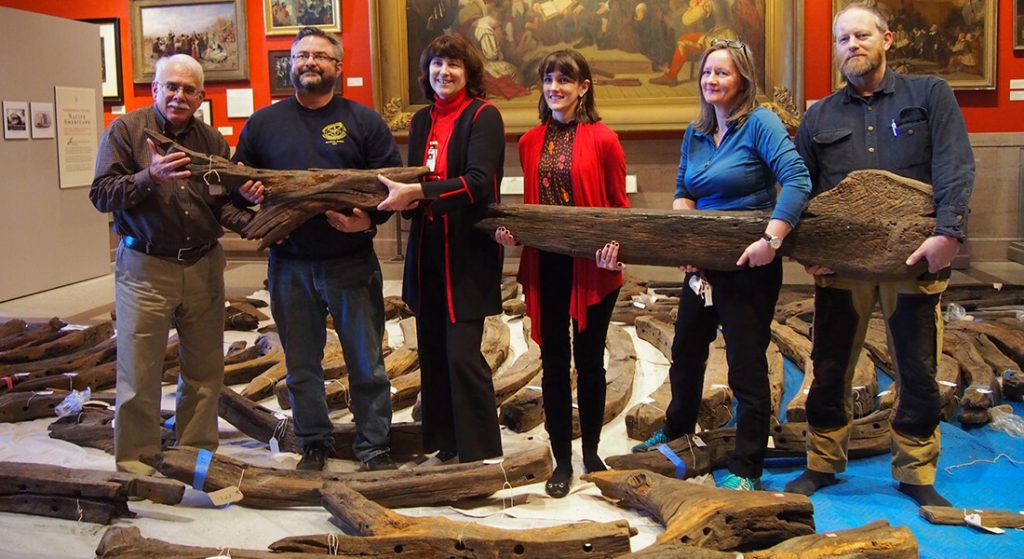 Archaeology The remains of a shipwreck in Pilgrim Hall Museum in Plymouth, thought to be a 400-year-old colonial vessel, have now undergone extensive scientific analyses.

In 1626, a vessel making its way to Virginia was forced off course, driven onto the Cape Cod peninsula and damaged beyond repair. Onboard were two English merchants, John Fells and John Sibsey, and a company of servants and farmers bound for Virginia, many of whom were Irish. The passengers and crew were helped by the Indigenous Nauset people, then sheltered by the English colonists at Plymouth for nearly a year while they awaited passage south.

Plymouth Colony governor, William Bradford, who assisted in rescuing the stranded party, documented the story of the shipwreck in his 17th-century journal of the settlement’s founding and early years.

In 1862, a great storm churned up an old wreck, and the find became known as the Sparrow-Hawk, hailed as the same ship that had brought the Virginia-bound passengers to Plymouth in 1626. Acquired by Pilgrim Hall in 1889, it has been one of the museum’s most intriguing artifacts for generations and often studied by maritime experts.

Now, for the first time, the remains have undergone extensive scientific analyses by leading experts in archaeological science, kindly facilitated by Donna Curtin, Executive Director of the Pilgrim Hall Museum. The results are published today in “Dating the timbers from the Sparrow Hawk, a shipwreck from Cape Cod, USA,” in the Journal of Archaeological Science: Reports, in which the researchers conclude that the remains are indeed those of a 17th century European vessel and could very well be the same ship that carried European settlers in 1626:

“Using a combination of several analysis techniques, we sought to identify the date range and provenance of the ship timbers. Initial dendrochronological analysis was inconclusive. But radiocarbon dating of the timbers from the wreck demonstrate that the remains are from a ship built of trees that were felled in the decades on either side of 1600, from the late 16th century to the early 1610s,” says Associate Professor Aoife Daly from the University of Copenhagen, who led the efforts together with Dr. Frederick Hocker, Director of Research at the Vasa Museum, Stockholm and Calvin Mires, Research Associate III at Woods Hole Oceanographic Institution, Woods Hole, MA, USA.

“Revisiting the dendrochronological evidence, we found that the planks’ tree-rings match with English tree-ring chronologies, confirming an English origin of the timbers. The physical remains of this English-built early 17th-century colonial vessel, extracted centuries after its transatlantic crossing from the salt marshes of Cape Cod, can now be proven to conform closely with Bradford’s historical account.”