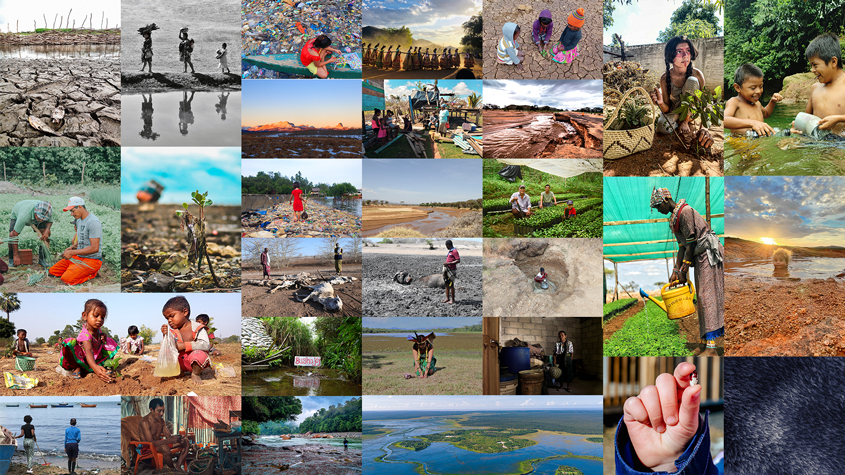 Young photographers from Brazil, the Philippines and Kenya are the three winners of the
inaugural WIPO Photography Prize
for Indigenous Peoples and Local Community Youth 2021-2022.

Themed Climate Change and Climate Action: Mother Earth through our Lenses,
the WIPO Photography Prize encourages Indigenous and local community youth
to express themselves on climate change and climate action – while raising their
awareness on how copyright can be used to protect their creativity expressed in the photographs.

Young people have the greatest stake in the future of our planet,
which is why I am pleased that the first-ever WIPO Photography Prize
is providing young members of indigenous and local communities with an opportunity
to express themselves through photography on the climate crisis and other related challenges
they are facing. These young creators, whose work is protected by copyright, can use the full power
of photography to better express their concerns about the world and share best
practices in their communities.

Among the hundreds of applications received, a total of 30 photos entered the final stage
of the competition. An independent panel of judges constituted by four international
indigenous and local community photographers selected three winners for the awards to be
delivered during an event at WIPO to celebrate International Mother Earth Day (April 22).

His photograph shows a tradition of a Sama Bajaus group in the Philippines of the creation
of new items from human refuse,
with a view to benefiting environmental preservation. In the photo, a Sama Bajaus girl
is cutting recycled plastic trash
into strips to make an ornamental pillow. “My photo depicts Sama Bajau’s empathy
towards the ocean environment. They are
firm believers in sea spirits, that if you pay respect to the ocean, it will provide you
abundance in fishing called padalleang”, he explains.

Speaking about the Subanen, Prince says they interpret climate change as the
punishment sent by Magbabaya (Supreme Being)
because of the community’s failure to perform their roles as good stewards of
natural resources. Nonetheless, even though
they live in a low-carbon traditional way, the climate crisis still negatively affects
Prince’s community because of its close connection with nature.

With second place, Prince wins photography equipment of his
choice with a value of up to 2,500 U.S. Dollars.

Joanderson Gomes de Almeida, 30, is an indigenous Pankararu from the State of Pernambuco, Brazil.
Joanderson is currently completing a master’s course at the University of Brasília.

The Pankararu people have a very strong characteristic of preserving indigenous culture and traditions,
Joanderson says. Unfortunately, his community is heavily punished by periods without rain and drought,
which makes it difficult to carry out traditional agricultural activities.

His photograph shows a tradition called the Pulling of the Vine, which is a part of the Corrida do Imbu festival.

The tradition helps to predict whether the coming year will be one of good harvests, abundance and good
or it will be a meagre year. “At that moment, the cosmological beings give us the way, the orientation
of what the climate will be like during that period,” Joanderson explains. The tradition also makes
each member of the community reflect upon what could have been done differently, and how
they can improve their attitude toward Mother Nature.

Joanderson’s message to innovators around the globe is to become partners with indigenous peoples as
“[their] relationship with nature is one of respect and not mercantile, because it is
from the land that we take our food in a conscious and sustainable way.”

“There is still a solution for our planet,” he says.

With the first place, Joanderson wins photography equipment of his choice with a value up to 3,500 U.S. Dollars.

Honorable mentions from the Jury

“My picture shows a mangrove plant that had been withstanding rising sea levels”,
says Jovi Totorea, a young Solomon Islander from the Hauhui Village Community.
“Mangrove has a potential to mitigate sea level rise caused by climate change and
act as a biological barrier from strong winds to low lying communities. Therefore,
mangrove restoration is a better option for my local community to mitigate the
effects of climate change”.

Mery Nube Utitiaj Nunink, a young Shuar woman from Ecuador, captured two kids playing
in the water. According to Mery, either lacking awareness or simply not being heard,
people from her community abandon the fight against reality, choosing to accept and
adapt to the changes. “That is the meaning behind this photograph: the bottle and the
tube are the problem; the smiles of the children show them adapting to and dealing
patiently and harmoniously with their situation,” she explains.

Photography Exhibition at the WIPO Headquarters

Starting today, the thirty shortlisted photographs are being exhibited at
the WIPO Headquarters in Geneva, Switzerland. The photography exhibition
is open to our staff and guests until May 6, 2022.

The WIPO Director General Daren Tang officially announced the winners at
the opening ceremony of the exhibition that took place today.

The Photography Prize was launched on August 12, 2021, as part of the celebration
of International Youth Day. This activity was designed in consultation with an Advisory
Board comprised by Indigenous peoples and local communities representatives, including youth,
and organizations, governments and individuals working on climate change, biodiversity,
photography, intellectual property, media and entrepreneurship.

Due to their close relationship with the environment and its resources and dependence
upon them, Indigenous and local communities are among the first to face the direct
consequences of climate change, such as increased drought, loss of biological diversity,
poverty and displacement, hotter temperatures and the rising level of oceans, among many
other. In the meantime, these communities are the key holders of traditional knowledge,
which can play an important role in assessing the impact of climate change and promoting
climate change adaptation. In recent years, the role of Indigenous peoples and local communities
in mitigating the impact of climate change has been recognized in a number of public discussions
on local, national and international levels.