Núria Sara Miras: “Differences are a source of joy” 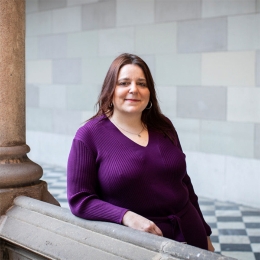 Núria Sara Miras has been appointed rector’s delegate for the management of the UB Equality Unit just the week before International Women’s Day (March 8). She tells us she is linked to feminism from three sides: as a researcher, she specialized in pragmatist feminism and has focused on the works of several thinkers; as an activist, she is a member of the UB Feminist Assembly, and from the institutional perspective, she has been the co-president of the Equality Committee of the faculties of Philosophy and Geography and History, and she is now starting her journey as the rector’s delegate.

How do you see this year’s March 8? What are the principles that should rule the day on this occasion?

I like the motto “together and diverse”. Feminisms are always plurality, and differences always bring a potential creation and energy. And joy. I like to see this plurality. I think that the intersection with questions on race, class and capacities makes us go deeper in the meaning of feminism and social justice.

Evidently, this year we cannot help it but think about the war. In fact, the feminist movement has been traditionally linked to internationalism and pacifism. Feminists from the turn of the 19th century to the 20th century already spoke out against the great world wars. They always tried to suggest an alternative formula based on care, interdependence and vulnerability.

As a philosophy, can you understand the thoughts behind a war?

Behind the war we find spurious interests, which are not democratic interests. I think war is the biggest political and democratic failure. We need to make a great effort to redefine international politics and connect it to politics at other levels, such as local. This was already said by feminists from the first wave, and it is said by many others in third-world countries. Imperialism is a predative way to understand the world. We should see the world as a common asset. We are currently pessimists because it seems this predatory view is wining: elites do not worry about the civil population, violence, famine, diseases to come, the resentment that’s to come in Europe. Violence only creates sadness and pity.

You mentioned the first-wave feminists. As a researcher, you work on historical figures of feminism. Can you mention some of these whose legacy is especially current?

For the reason I mentioned, Jane Addams: she linked social pacification at the municipal level to the great international political movements. She tried to define democracy in a more social way. I think this though has never been implemented yet. By the way, we have a room at the UB with her name inaugurated by the Equality Committee of Philosophy, Geography and History.

I want to mention Angela Davis too, who talked a lot about the oppressions due to gender, race and class. She helped us to understand the power.

One of my favourites is Vandana Shiva and the global south movement that defends other world views, a kinder way which is more integrated to nature, a feeling of interdependency among all living beings. I come from the rural areas, I am from Valls, and the countryside is dying. For me, this century’s challenge is the question of the access to the sources of life, sustainability, the sustainable development goals. There are many women involved in this field, from all the countries, and they have many things to say in eco-feminist and indigenous movements.

I can only say that, in my discipline, feminism and female philosophers are those who are doing the most interesting things from the political and intellectual perspective.

Last, let’s talk about you being appointed the rector’s delegate for the UB Equality Unit. Where is the task for equality, at the University?

It is a very expansive moment. You can do many things because the governing team is very receptive, and there are many initiatives and diversity and plurality in the centers.

Among the most urgent things is the re-taking of negotiations on the third axis of the Equality Plan, on work conditions, which is not fully covered yet. We also need to set up the commission for monitoring the other axes: many actions are underway, mainly in teaching, and therefore we need to work on indicators to assess the quality of these initiatives and make new ones. Also, the protocol for harassment needs some retouches. We are waiting for the Ministry of Equality and Feminisms to provide guidelines to make a unified harassment protocol for all the Catalan universities. We think this will be a great tool which will make the job easier. We have other open working groups: one on the State Pact against Gender Violence, one on LGTBIQ+, and one on menstrual care and poverty.

These are the priority action lines for the next sixth months, without prejudice to work on the implementation, the monitoring and the assessment of the other axes in the Equality Plan.