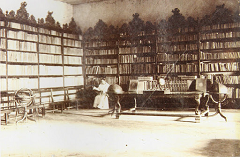 Dr Cristina Martinez-Juan, Research Fellow in Philippine Studies, has been awarded a £350,000 grant from NEH/AHRC New Directions for Digital Scholarship in Cultural Institutions program, a joint initiative between Arts and Humanities Research Council (AHRC) and the US National Endowment for the Humanities (NEH) to advance digital scholarship at museums, libraries, and archives.

Dr Martinez-Juan will collaborate with Associate Professor of Spanish and Portuguese Christina Lee of Princeton University to virtually reconstruct “The Library of the Convent of San Pablo” (Manila, 1762).

The project seeks to digitally reconstruct the library’s materials as close to how the archives might have been in 1762 before the British siege of Manila. During the siege the repository of more than 1,500 rare manuscripts, maps, and early printed materials relating to the Philippines and other regions of Asia were seized and auctioned off, subsequently scattering them across three continents.

The three-year project will enable metadata for the 1,500 collection items to be created and ingested into a digital content management system with a well-designed front-end open access site. A selection of 300 items will be transcribed and translated beyond their metadata entries, while a further six will be extensively documented, analysed, and annotated as a model for the type of scholarly work that the digital library can support.

Beyond the digital reconstitution of the archival corpus, the “return” of the library to its original site is re-imagined to include the reconceptualizing of the library’s original systems of knowledge production, modes of access, and use. This virtual archive will serve as an entry point to the study of Spanish colonialism in the Pacific and the experience of the communities it affected, especially in the Philippines.

Whilst working on the proposal for the project, Dr Martinez-Juan created a prototype site with the funding provided by the SOAS Seed-Corn fund. The prototype was used as a scoping exercise to conceptualise the narrative of the project and to look for possible grants to fund the full project.

“The SOAS Seed-Corn grant really helped me write out the project narrative and reach out to UK and international partners across the globe. It is wonderful that what seemed like just a really good story was encouraged by SOAS through the seed corn grant and now being funded by both the UK and US.”

Visit the prototype site of the project: A Digital Repatriation of a Lost Archive of the Spanish Pacific: The Library of The Convent of San Pablo (Manila, 1762)